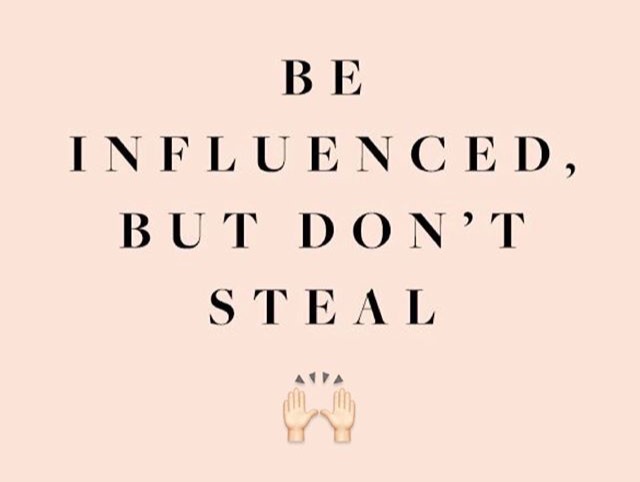 I think it is kind of obvious what I’m going to talk about from the title, but I am going to just explain why I am finally expressing my thoughts on social media and the difference between stealing creative content and being inspired/influenced.  Lately this has been a prevalent topic in my life whether it is companies stealing designs, my friends’ photos being reposted without credit, or even my personal photos being imitated, meaning someone will literally recreate the photo and then post the same caption.

I know what you guys are thinking… why is this such a big deal? Shouldn’t you be flattered people are copying you?  But this is the thing, there is a difference between admiring someone and being inspired by someone and then just plain ripping people off.

I am ALLLL for being influenced.  I have my set of bloggers and Youtubers and Intsagramers that I look up to.  I have a Pinterest board that is literally entitled “inspiration” and another one titled “captions”.  The thing is instead of copying, or recreating I draw off of their photos and try to make it my own.  And if I do get a quote from someone or use a photo that isn’t my own, I give credit where credit is due. I know so many girls that do this and are transparent about who they’re inspired by and where they get there ideas from, but I also have seen so many people claim someone elses work as their own.

Social media has become a creative outlet for people.  These people put a lot of thought and effort into creating original content whether it’s a video, blog post or photo.  And when I say this I mean A LOT of time and effort.  What a lot of people don’t see is the planning, the organizing, the actual creation, the editing and then after all of that then the final product is put out there for people to see.

It is so discouraging when you put in a lot of time and thought into something and then someone comes and just takes is and passes it as their own.  It really sucks to see those people who are constantly ripping people off get ahead even though they’re being shady.

I guess I will finish my rant off with this.  In an industry that is infamous for covering truths, and framing things to seem perfect, let’s be transparent.  Let’s create art and give credit to those who inspired you.  Let’s make it known that sometimes you don’t come up with this all by yourself.  Let’s be honest and upfront with those who follow you whether it’s 500 or 5 million.

One thought on ““Be Influenced but Don’t Steal””