Here we are, staying true to my promise/goal of one blog post a week.  This week I asked IG to decide the blog’s fate… how we met or how he proposed.  Let me tell you how we met won by a landslide.  I honestly LOVE telling this story.  It makes me sound super bad-ass, and confident. Not like the geeky nervous person I actually am.  So with out further introduction, here is how we met.

So I guess really it starts around my early to mid teens at 7:30 am mass.  My family (mother) was crazy enough to wake up and go to mass at 7:30 am every single week.  Lucky enough for my younger sister Delaney and I, so was the Barr family.  We didn’t know their names, or how old they were but Chris and his brother Mike were really what made mass exciting.  We would sit behind them and literally whisper to each other about how cute “the brothers were”.  Some days we were even lucky enough to say “peace be with you” and shake there hands to which I don’t know how I didn’t just burst into a giggle fit right then and there.

Fast forward to sophomore year in high school.  This is when we start confirmation and all the high school kids from the area pretty much got lumped together.  I would still see Chris here and there and still thought he was cute as ever.  By then I would say I definitely had a crush.  My friend at the time ended up dating Chris’s best friend, Phil and they all hung out together while I was off somewhere else.  I vividly remember seeing Phil and Chris at CVS after church one day and since I was friends with his girlfriend Phil recognized me.  They said hi, and that was kind of the end of that.  I know this doesn’t seem super important but it is. 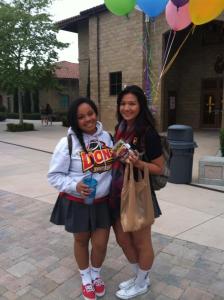 Fast forward to senior year in high school. I had transferred from my public school to a private Catholic school and really didn’t know anyone.  Prom was coming up and I didn’t know who to ask.  I didn’t know that many guys from my school and I was in that YOLO mindset.  I thought Chris was super cute, and we would look good in prom photos. (LOL) So what did I do? I asked my friend who was dating Phil for Chris’s number and sent probably the most awkward test ever. 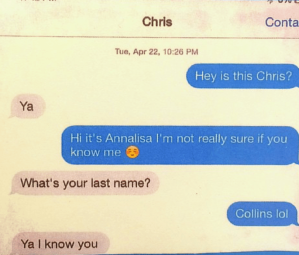 From there we just started talking.  I went out on a limb and it actually felt like it was paying off UNTIL…. I got asked to prom by someone else, with their mom watching.  SO I said yes. How awkward. Not to mention I had told this person my plans of asking Chris to prom.  So I had a knot in my stomach, unsure of what to do.  I texted Chris and I would say this is a pretty accurate representation of what we said:

Me: So, I got asked to prom today

Me: Well not really, I was going to ask you

To which I freaked out. I NEEDED to fix my situation. SO me being in the YOLO mood I was in I went to BJ’s with my best friend Ashlynn and talked over pizza.  And so with her moral support I dumped the other guy and secured Chris as my prom date.  HELL YEA!  I mean my parents definitely told me I was super mean and had a black heart, but hey they LOVE Chris and if it wasn’t for my “black heart” they never would’ve met him.

From there, I threw a party to meet Chris in person for real.  And yes, we hadn’t actually met yet.  Unless you count “peace be with you”. Why I couldn’t just say, oh let’s go get some coffee? IDK I was 17 you tell me.  My parents were out of town, he was getting back from a college visit and so what else was I supposed to do? … Oh yeah I could’ve just gotten lunch with him or something.  Let me tell you, the party was a mess, and well I got grounded.  To the point where I had to BEG my parents to let me go to prom.  Thankfully we got to go and then we got to go to his prom.

Fast forward to today, we’ve survived long distance through college, we are getting MARRIED this Sunday and we are expecting a little bagel bite (baby) in July!!! It’s crazy what an awkward text message will get you. And THAT, is how we met. 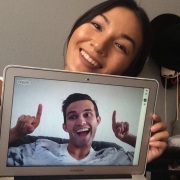