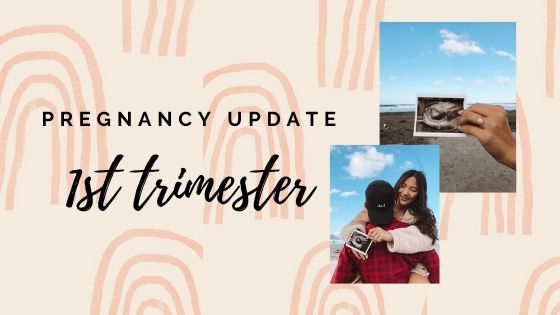 Currently being 21 weeks and 3 days pregnant I was reading through Sivan’s website and got inspired to write this pregnancy update.  I feel like I totally just skipped over the whole 1st trimester update.  And here I am half way through my second trimester.  I am thinking about doing a Q+A too so if you’re interested PLEASE comment.  But let’s be honest, I’ll probably do it anyway even if there aren’t any comment.

I have written a blog about finding out I was pregnant so if you’re interested you can find that here!

I guess I’ll start with why I had suspicions.  I was only a week late on my period.  Yes, I said only, I feel like my period has had times where it’s been two weeks and one time when I switched birth control I didn’t get my period for three months so really from my experience it wasn’t crazy for it to be a little off the timing I was used to.  So that really didn’t give it away.  I vividly remember the morning the day before and the morning of the day I found out feeling a type of nausea that I had never felt in my life.  Like it hit me hard. I didn’t vomit or anything but like I literally had never felt like this in my life.  This to me was a huge giveaway.  I also remember my boobs being SO sore.  Once again, I had never experienced something like this in my entire life.  I have had sore boobs before, but this time it was at the point where I would shift in my sleep and they would hurt. So these two things happening for two days drove me to take a test.

This is where I will say LISTEN to your body.  I could’v put myself in a place of denial, but I just had a gut feeling. I know that it’s easy to say these are both very common period symptoms but when I am telling you my body just felt different, it’s not a joke.  And what do you know, I was right.  It was definitely a type of intuition that when I read that the test was positive I was shocked but I definitely had a feeling.  Otherwise I wouldn’t have taken the test.

From here I went a week or two with the same two symptoms, nausea and breast soreness.  The food aversions started within those first few weeks.  The biggest thing for me has been chicken breast and bell peppers.  I kid you not, I smell them and immediately I just feel disgusted. It’s weird, I can do chicken if it’s shredded a certain way, or if the cheapy fast food chicken.  But I can tell almost immediately if I won’t be able to stomach something.  I also had to start eating something within like 15 minutes of me waking up or I would feel nauseous for the whole day.  I would have a ritual, wake up, make a tea, have half of a bagel (that’s all I could stomach).  Thankfully that’s not how I am anymore but that was pretty much all I could eat in the mornings.  One time, I tried to rush myself and eat in the car and I literally vomited while driving on my way to work.  This was the only time I vomited, I’ve had a few spells of dry heaving but that’s it.

The next crazy thing of the first trimester was the exhaustion.  I would literally fall asleep anywhere at 6:00 pm.  I could be sitting on the couch with family, in my room, pretty much anywhere and just fall asleep. And it wasn’t just a nap, I would be out for the rest of the night.  If I fell asleep on the couch Chris would usually wake me up around 10:00 take me up to our room and I would sleep until it was time to get up the next morning.  I would say this was really intense up until the week before the second trimester.

I lost I think it was 10 pounds my first trimester.  I couldn’t eat as much as I wanted to because I would always get full after a few bites of food.  I didn’t want to eat as much because I would get nauseous if I ate too quickly, had too big of a bite, and nothing really sounded good to me.  Except for Chinese food.  That was the one thing I could and still can eat like an abundance of.  I didn’t really exercise because I was either at work or sleeping most of the time.  I was a little concerned at first but it definitely made sense with my eating habits and I was eating healthier.  Also, I obviously wasn’t drinking alcohol which is a big decrease in empty calories.  It wasn’t until my second trimester that I have returned to my regular pre-pregnancy weight.

With that said I was able to wear my normal clothes pretty much that whole trimester.  At some point my jeans did start to get uncomfortable but I could still zip them and everything.  I remember thinking that the second you get pregnant you need to buy new clothes but even know I feel like buying new clothes would just be more of a luxury, not a neccesity.

I definitely “felt” more pregnant my first trimester than this current trimester.  Even though I wasn’t showing, I had symptoms that I don’t have anymore.  It’s crazy how your body just stops reacting to certain things like clockwork.  I remember entering my second trimester and feeling like a completely new woman.  But we aren’t going to talk about that because that will be a different blog post. I think that’s about it for my first trimester. Like I said in the intro, let me know if you guys have questions!